Africa, A Past Remembered 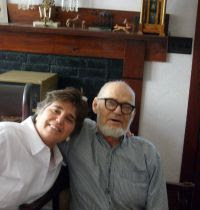 We are starting the month of June with a fantastic interview. Today I’m chatting with Janet Grace Riehl who lives in St. Louis, Missouri and shares time with her very talented father, Erwin Thompson. She has an interesting past that I would like her to share with my readers. Janet sent me stories from her two latest trips to Africa. What a fabulous adventure. So without my babbling on, I’ll let Janet get a word in edgewise.

G: Hello Janet, tell us a little bit about yourself.

J: In my creative life I'm a writer-artist-storyteller-musician. I dedicate periods to each usually, so I can focus. Right now is my writing period. I recently learned how writing, performing, music, and family history can be blended together when we made our audio book of "Sightlines: A Poet's Diary."

I've always been a generalist who likes to make connections through the arts and across cultures. I'm a country girl who roamed the world and then came home. In addition to my own blog-magazine "Riehl Life: Village Wisdom for the 21st Century," I write a monthly Creative Catalyst column for the Story Circle Network blog

J: I lived and worked in two countries in Africa (Ghana and Botswana) for five years in the 1970s. Africa gripped me then and has continued through the successive decades to shape my life. 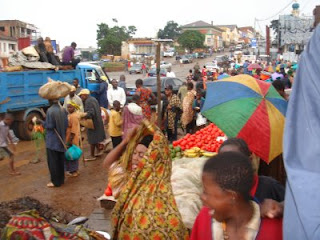 G: Tell us about your work there.

J: For three years I taught literature and English, a Second Language in Secondary Schools, as a Peace Corps Volunteer. I was posted in the north of the countries where I served. It tends to be quieter and more frontier territory there because the north is further away from the capitol. I'd earned my masters in English before I left America to go to Africa. My teaching was high level: Chaucer and Yeats as well as wonderful West African novelists like Chinua Achebe and Wole Soyinka.

My last two years in Africa I worked in a small village in the south of Botswana as an independent volunteer, no external support. I worked with villagers to set up a craft and sewing center for young girls, to stem the flood to the capitol where trouble often awaited them. On my recent trip back there, I discovered our center had grown into a multi-village megaplex. Quite a wonderful surprise!

G: How often have you traveled to Africa?

J: I went to Africa once in the 1970s through Peace Corps...with breaks to the U.S. twice, and once to India. In 2008 I gave myself the gift of two return journeys...long promised over 30 years. These were, to me, sacred pilgrimages of homecoming. I love traveling alone.

G: Tell us about your 2008 trips. How did it feel returning to Africa?

J: The first trip was to Southern Africa (Botswana and South Africa) in August. I found so much changed on the surface, but underneath the African spirit remains. I was heartened by that. I hung out with the younger generation quite a bit...especially young men. In Botswana, I still spoke the national language of Setswana. That provided an additional bond to the local culture. I told the young people that they'd been born after the first time I'd been there...and that I was old enough to be their mother. We had so much fun together!

My trip to Southern Africa of three weeks covered vast expanses of territory with an ambitious agenda of reunion. In contrast, my trip to Ghana was much more simple. Here I found wonderful reunions with old friends and made many new friends. I stayed for three weeks in Busua Beach at the African Rainbow Resort owned by friends of friends. It was small, cozy, and a domestic base to be at home in the place and the culture.

I swam three miles in the ocean to an island with only two palm trees as markers. I wrote, enjoyed community, read extensively from my friend-innkeeper's library, and helped him midwife a poetry book. The month I spent in Ghana overlapped with national elections, so that was significant and exciting.

G: I understand you celebrated your 60th birthday in Ghana?

J: Yes, my birthday felt like a landmark birthday to me in which I moved into the next phase of my life to claim the dignity of Elderhood. I couldn't have been in a better place to celebrate this threshold. My 60th birthday fell on December 29th. My new friends arranged an outing to beautiful places I hadn't seen in the area. That night they gave me a surprise party on the roof. A professional singer played happy birthday for me; they made a cake to celebrate my ocean swim; I received a card with a poem written just for me; Comfort gave me a gift from her shop. It was the best birthday I ever had in my life! They celebrated me, as well as the birthday itself.

G: I want to thank you, Janet, for being with us today. It has been a pleasure to relive your African experience. This of course, is a two-part blog, so join us next week and check out her latest project.

Come visit Janet's blog and click on "Riehl Life: Village Wisdom for the 21st Century" for connections through the arts, across cultures and generations. Also click on Tour Schedule to see what Janet is up to for the next few weeks. There's a contest on each stop that gives participants a chance to win an audio book. So hop on the train to Riehl Life . . . you might find it interesting.
Posted by Gwyn Ramsey at 7:00 AM

What a great blog! Janet and I have the Peace Corps in common, but she went on to make a lasting difference, a legacy that will live on.

Thank you, Mary. I admire the work you did. I also admire the vivid way you write about your friends there and everyday life. I aspire to do that.

Thank you Mary for visiting my blog. I do hope you enjoy Janet's tour. It's exciting.